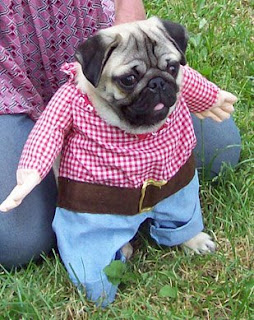 Not much is known about the origin of Pugs. Some believe they came from the stars, while others claim they sprang from the thigh of Zeus. Some people have even theorized that they are not dogs at all but tiny wizards sent from Jupiter to end racism (ok, only one guy theorized that, and he was pretty high). Wherever they come from, Pugs have taken America by storm. So what are the pros and cons of Pug ownership? Let's take a look.

Pro: Pugs are insanely friendly. They like everyone. Kids, adults, nuns, rapists, pedophiles. They don't judge. In fact you could walk around with a string of severed pug heads around your neck, and every living Pug you meet would still want to be your best pal.

Con: Pugs are pacifists to a fault. One of the reasons humans started keeping dogs in the first place was to help them ward off threats. But pugs ain't down with that program AT ALL. The pug attitude is basically "Hey, if it's your time, it's your time. Who am I to interfere with the plans of the cosmos?" They're like little Daoist monks. 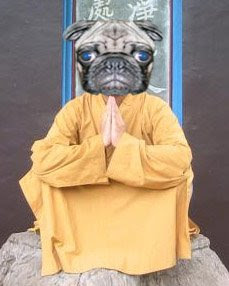 Pro: Pugs are homebodies, so they're good for city dwellers. They don't need huge fields to romp around in. In fact huge fields scare them. So does the heat. They have a low tolerance for it and will generally start to swoon after only a few minutes in the hot sun. Also they keep losing their asthma inhalers and are always being stuffed in lockers by other dogs.

Con: Pugs are needy. The crave intimacy. If you want a dog that respects your personal space, don't get a pug. Pugs are all up in yo grill. And they love swatting at soft human skin with their big, clawed meat-hooks, which can be a problem since they are built like tanks.

Pro: Pugs don't generally bark too much. Unlike other small dogs pugs are relatively quiet. And when they do bark it's a raspy old man bark that most people find more funny than annoying. If pugs could talk they'd all sound like Yoda.

Con: Although pugs don't bark a lot, they do make every other noise imaginable most of the time. They snore, fart, grunt, sneeze, snort, and smack their big droopy lips constantly. They're like Benjamin Button old man babies.

My final ranking: The pug gets four out of five Mer-men

Posted by STEVAPALOOZA at 8:29 AM