Today, the borough of Brooklyn takes up all of Kings County. But in the 19th century, the city of Brooklyn shared the county with four smaller towns that served as its suburbs. These towns were Flatbush, New Utrecht, Gravesend, and Flatlands. 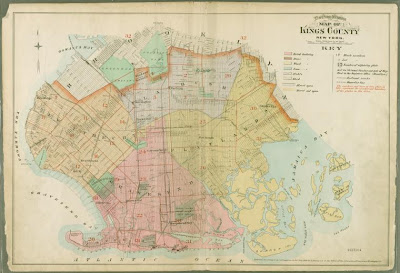 The place most Brooklynites gravitated to was the town that bordered the sea, Gravesend. In addition to the many attractions of Coney Island, Gravesend also boasted a number of racetracks. Although nothing remains of these racetracks, we can still easily visit them through old documents. So let's do just that! 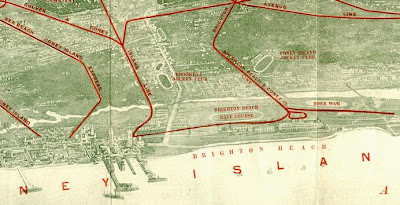 
Bounded by Ocean Parkway, Coney Island avenue, Avenue I, and Avenue J. Originally Joe Hall's Driving track (attached to Hall's grand hotel at Coney Island avenue & Avenue I), Deerfoot opened in 1873 and hosted harness racing as well as the occasional pigeon shoot, and foot race. Despite seeing it's share of tragedy (several murders happened on the grounds over the years, including the fatal shooting of the park's proprietor in 1875 by an oats salesman who took a friendly wrestling match a little too seriously) Deerfoot endured until 1886. 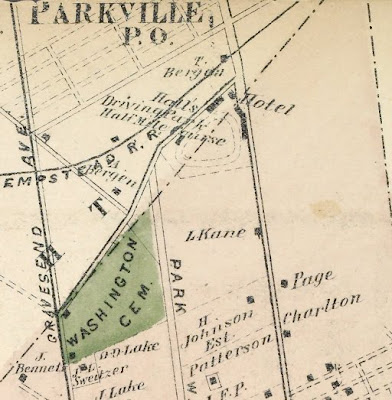 In 1887 the park was purchased and expanded by Brooklyn bakery magnate John H. Shults. But rather than open his new track to the public, Shults used it strictly for private races and as a training ground for the horses of his own Parkville stock farm (although he was kind enough to replace the old board fence with a picket fence, through which passers-by could see the races). The land was sold and built over sometime in the early 20th century. 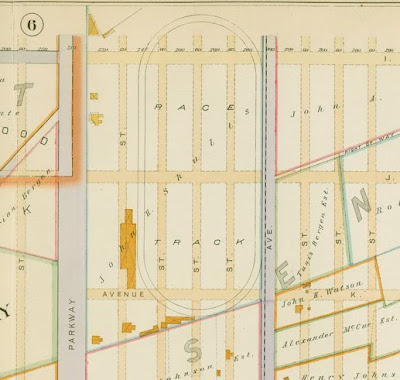 Bounded by Ocean Parkway, McDonald (Gravesend) avenue, Kings highway and Avenue T. Despite the name, this track was not located in Prospect Park but in the heart of Gravesend. Like Deerfoot, it was a harness racing track, but it also served as a venue for a variety of other attractions such as agricultural fairs, boxing matches, "Renaissance Fair" style medieval tournaments, and even a beautiful baby contest (for which the winner received a $1,000 baby carriage). 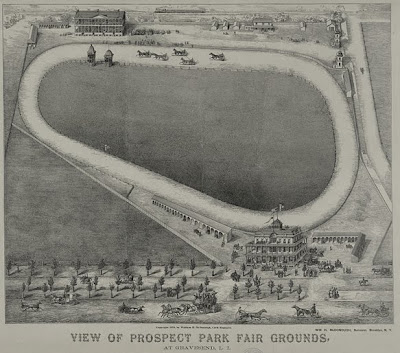 Engraving of the fair grounds from 1878 showing the general layout 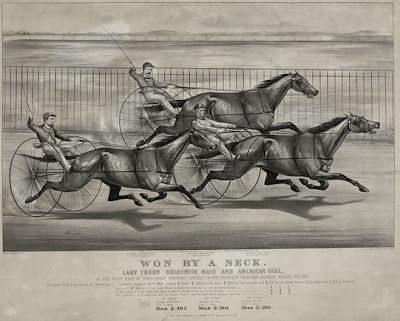 Trotters on the run in the Prospect Park Fair Grounds. Currier & Ives print from 1869.

The PPFG track operated from the late 1860's to the late 1880's , and at it's height some considered it to be the finest race track in the country. But as mile-long tracks started to appear, the half-mile track at the fair grounds (and harness racing in general) began to lose its appeal.


Bounded by Ocean Parkway, McDonald (Gravesend) avenue, Kings highway, and Avenue U. After the Prospect Park Fair Grounds folded, the track was expanded and transformed into a thoroughbred racetrack by the Brooklyn Jockey Club in 1886. 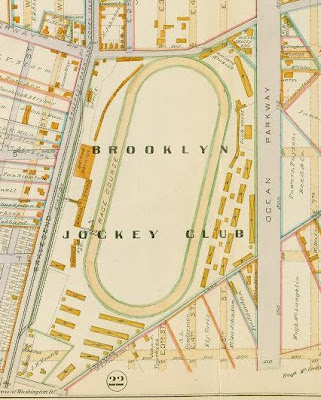 With it's large grandstand and mile-long track, the Brooklyn Jockey Club track was one of the premiere racetracks of New York state. A special spur of the Culver railroad (now the elevated F line of McDonald avenue) was constructed to deposit visitors right at the grandstand gate, and the track featured a restaurant and it's own jail to house rowdy gamblers.

Grandstand of the Gravesend racetrack 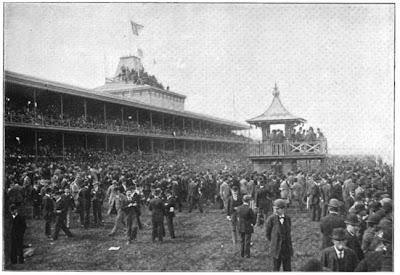 Crowds gathered for the 1893 Brooklyn Handicap at Gravesend Racetrack


Although the racetrack closed in 1910 (because of a state-wide ban on betting), the grandstand and stables continued to stand for another decade, finally being destroyed in the early 20's. 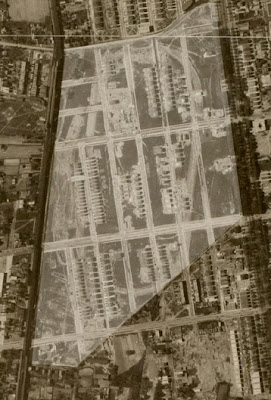 In this aerial photograph from 1924, the imprint of the Gravesend track and it's buildings are still clearly visible as homes are being built on the grounds. 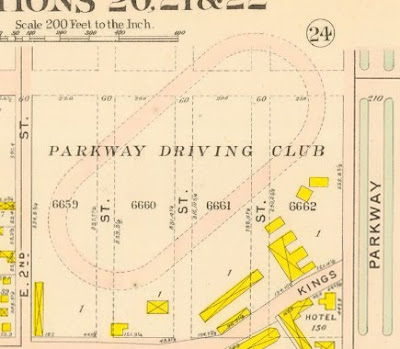 Layout of the Parkway Driving Club from a 1907 map. 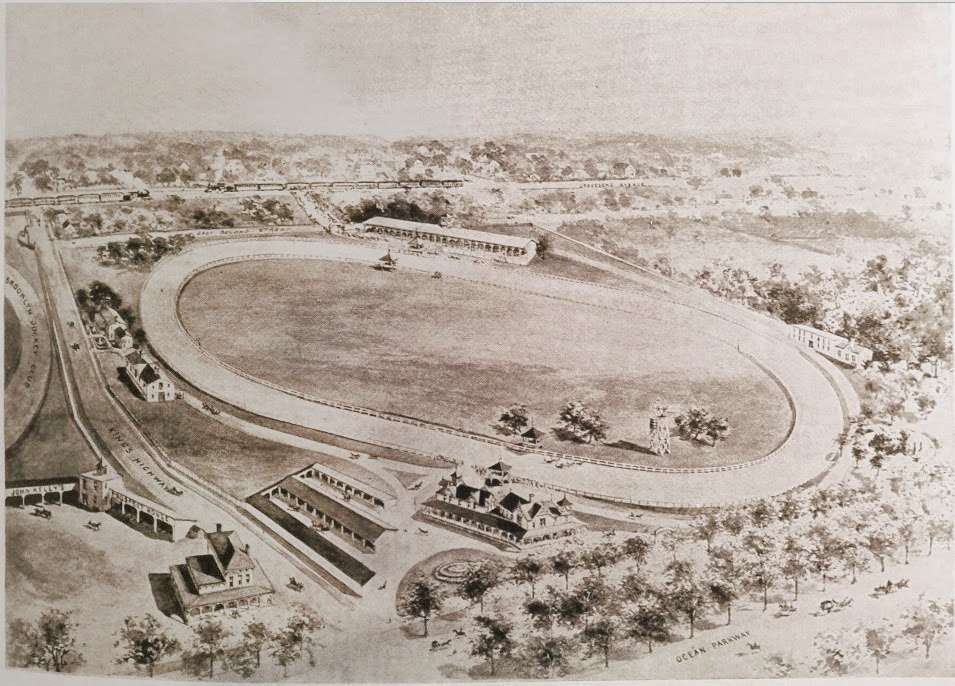 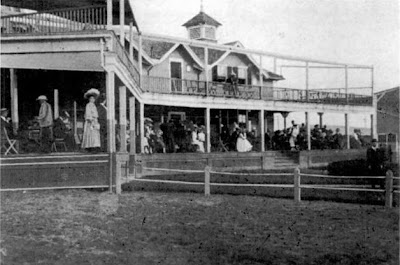 Clubhouse of the Parkway Driving Club, 1905


After horse-betting was banned in 1910, the Parkway track became a baseball field, eventually being converted into Daubert's Field, a semipro baseball park owned by Brooklyn Dodger Jake Daubert. In 1921 the land was built over and converted into a housing development called Ocean Gardens.


5) Brighton Beach Racetrack
Bordered by Ocean Parkway, Coney Island Avenue, Neptune avenue, and West Brighton avenue. This track, opened in 1879, has the distinction of being the longest-lived (and therefor most successful) of the Brooklyn racetracks. 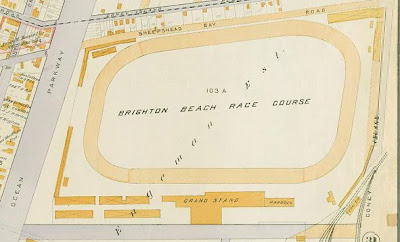 Unlike the other tracks, which were located in relatively isolated areas, the Brighton Track was right in the middle of Coney Island, making its races easily viewable from many of the surrounding homes. At one point several residents of nearby Duck Hill began erecting makeshift grandstands on their property and charging patrons a nickel to watch the races. A series of police raids soon followed. 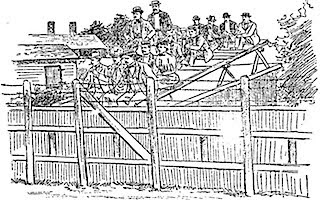 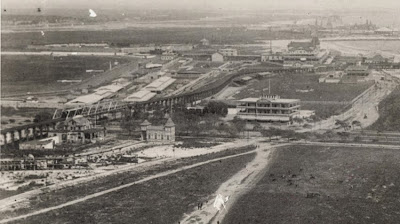 Brighton Beach Racetrack (left) at the Coney Island end of Ocean parkway. Also pictured is Coney Island's first elevated train line, which was taken down in the early 20th century.


In addition to thoroughbred horse racing, the Brighton track also featured dog-races in the off season. In 1901 the track switched to harness racing, and later, after betting was outlawed, it became a motordome for car and motorcycle races. It was destroyed in the 1920's.


Bounded by Ocean avenue, Gravesend Neck Road, Jerome avenue, and Brown street. This was Brooklyn's largest and most extravagant racetrack. Carved out of a thick patch of woods in 1880, the Sheepshead Bay track was unique in that it had both a standard dirt track and an English-style turf (grassy) track. The first of it's kind in the US. 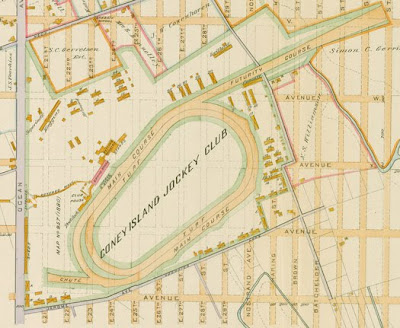 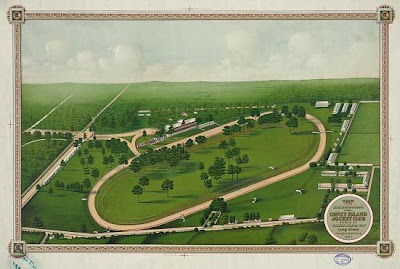 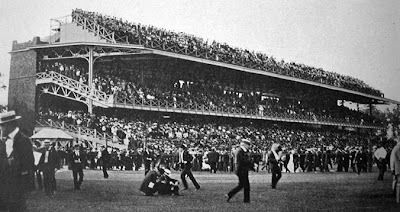 In addition to thoroughbred races the track also featured other types of horse contests such as steeplechases (races that including obstacle jumping). The spacious ground were also often used for fairs, games, and even the occasional clam bake. After betting was outlawed in 1910, the track saw a second life as the Sheepshead bay speedway, a car-racing stadium. 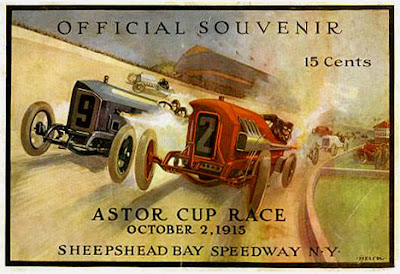 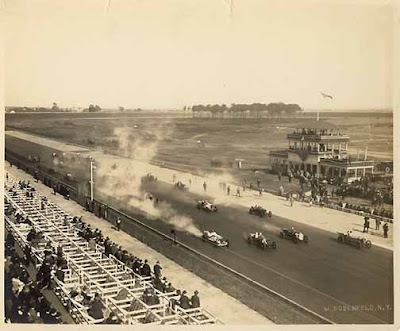 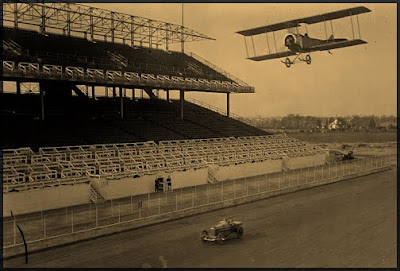 
Motoring spectacles aside, the Sheepshead Track eventually suffered the same fate as the other racetracks and was razed and built over in the early 20's.
Posted by STEVAPALOOZA at 5:37 AM 10 comments: